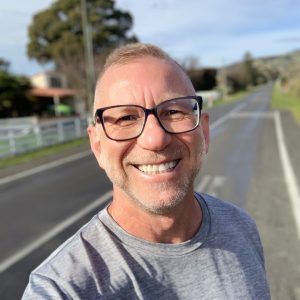 Dave Gilpin was born in Birkenhead, England and moved to Australia at the age of 5.

He became a Christian at 20 years of age while studying Civil Engineering at Sydney University. After becoming a Youth Pastor in Brisbane and after seeing the ‘Hillsborough Disaster’ in the UK where around 100 Liverpool football supporters lost their lives, he felt the call, along with his wife Jenny, to return to Britain to plant churches across the north of England and beyond.

In the intensity of it all, Dave once had a humorous yet poignant penny dropping moment that God hates the colour Beige- mostly because it’s bland, mediocre and terribly boring! So he wrote a book called ‘Rage Against Beige’ that was bought by IKEA in the United Kingdom to be used as part of their catalogue. He also had a ‘revelation’ that God hates Volvos. But that’s for another day.

Dave’s other books include ‘Sacred Cows Make Great BBQs’, ‘Jesus, Save Me From Your Followers’ as well as his latest Kindle Ebook ‘The Truth Diet’.

After being a Pastor for decades building and establishing churches across Great Britain and internationally (as well as creating waves and rocking boats) he now specialises in championing churches and pastors, changing cultures through preaching and teaching, as well as training people to become master communicators.

His skill is to find and nurture the genius in everyone and then let it fly by taking away the tiny weights that often pull it down.

He can’t wait to meet you, especially if you’re looking to have him at your conference or church in the near future.

His wife, Jenny, accompanied Dave in his church planting endeavours, whilst at the same time establishing a ministry for women, men and children rescued out from human slavery. Financed strongly by the British Government, the organisation contributed to the restoration of around 5000 survivors of trafficking by creating around 15 safe houses across Britain, outreaching to thousands and providing back to work opportunities for hundreds!

They now live on the Gold Coast of Australia and have one son who resides in Sydney.