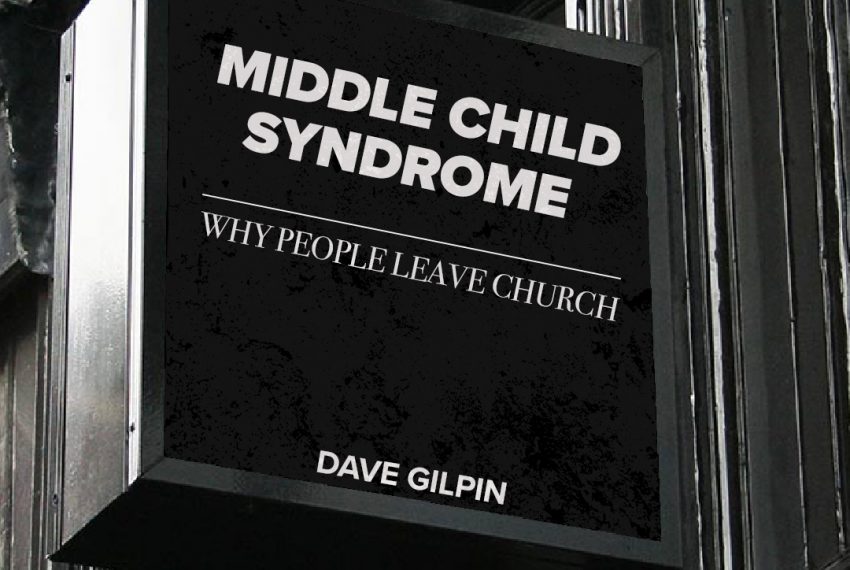 Have you ever seen the comic sketch, ‘The Only Gay in the Village’? This famous Little Britain sketch is one of the most powerful observations of human nature ever to be broadcast on TV.

The more established title for this quirk of human nature is ‘Middle Child Syndrome’. When you’re the only one- the talented one, the passionate one, the pioneering one and the one others look to and need, you automatically derive such a sense of security, hierarchical status and deep pleasure from it. It slowly becomes your single source of meaning and significance. And that’s where the danger lies. When another ‘gay’ turns up, it should be a happy connection for you yet instead it becomes an awkward and disturbing one as someone quickly takes away your limelight as the new ‘gay’ in town.

It’s the same with church life. The people who spent hours each week of each month praying for revival and growth are deeply disturbed when it comes. Initially they feel elated but then start feeling uprooted as the new comers each begin to take their place.

If you’re a church leader, you know the feeling well when a new church bumps itself next door to yours! (You’re response to it will either reduce MCS in your church or increase it.)

Jesus also highlighted these deep, raw emotions when he shared the story of an older brother being totally perturbed when all of his father’s attention was turned towards his younger brother after finally returning home from squandering all of his money on women and song.

Middle Child Syndrome is simply an extension of this. When a third child arrives, the middle child gets squeezed into invisibility and loses all confidence… while the oldest gets to regain a glimmer of limelight (by being part of the parenting team) and the new born plays happily to the adoring crowd.

On reflection, well under half of the people who became ‘commonly known’ in church life leave it because of a need to leave or a ‘call’ to leave. A greater number leave because they’re no longer ‘the special one’. Another ‘gay’ has moved in. And instead of open warfare that gives away what’s really happening, the victim of this stolen limelight becomes passive aggressive. They become cynical, distrusting, critical and distant in heart- all as a kind of retaliation to the injustice of the new arrival.

The usual suspects are then dragged up- ‘the church only wants your money’, ‘there’s not enough worship in this place’, ‘I feel led by the Spirit to move on’, ‘the teaching is too shallow’ and ‘there’s no love in this place’. It is, however, often a cover up for rejection.

Insecurity not re-centred and calmed by a return to the gaze of Jesus will result in people starting to close down and eventually sheer off. They either give up, backslide and secularise or become the ‘new gay’ in another church village. Until someone even newer eventually comes along and the cycle continues.

The answer to it all is found in identity. To move from being identified by function, skill or personality back to being identified with Christ (as a unique, celebrated child of God) requires a fresh altar of surrender and devotion, a ‘bench’ of recovery and reinvention and a maturity of character that moves you from being a doer to being a releaser of doers.

To accelerate all of this takes a deliberate celebration and welcome party for the new ‘gay’ in the village, the new ‘Young Gun’ on the team, the new church in town, the fresh return of the ‘Prodigal’ and the new ‘Whizz Kid’ that’s breezed in from the back of beyond, while retaining a deep honour for those who got the whole thing started. They’re probably not as good at doing what you do or once did, but then how will they ever get good unless they’re allowed the grace to try, the grace to fail and the grace to rise. Don’t let jealousy move you.

Here’s to the village where every newcomer thrives and every resident stays to make it happen. Here’s to the ever widening front door of your church and the ever narrowing back door as people pack themselves in to find once again their limelight in heaven, each deciding to elevate instead of exit.